Eternal Sunshine of the Spotless Mind is a movie that I stumbled upon while doing a search on how our memories work.

Joel Barnish (Jim Carrey) is a withdrawn man with an inactive social life. One day on his commute to work, he has an urge to go to Montauk instead of work. On the way back from Montauk to New York he hits it off with Clementine (Kate Winslet), who is the polar opposite of him. She has brightly colored hair, and is an unrestrained person who speaks what she thinks. What they do not know is that they had had already been in a relationship for two years, and when it turned sour they broke it off.

The reason why they are unable to remember any of it is, is that Clementine had had her memories of Joel erased. The heartbreak of the relationship breaking off too much for her to bear with. While Joel was managing to deal with the relationship not working out, he broke down when he came to know that Clementine had him erased from her memories. Distraught, he goes to the same company (Lacuna Inc.) and signs up to get her deleted from his memories.

The way it works is that representatives of the company ask the customer to hand over all items they have that are personally associated with the person that want deleted. Then they ask you to think of the memories associated so that they can form a brain map specific to the person. Once the configuration is done, they attach a computer based apparatus to your head and begin a systematic deletion of memories while you sleep.
This dream/memory world is where most of the movies takes place. Starting with the earliest, Joel goes through all the memories associated with Clementine. The most recent memories are painful, and full of angst with all the passive aggressiveness they had displayed towards each other. The deletion of these memories serve as a catharsis for him. However as he goes further in the past, he begins to recollect all the happy and rosy moments he had shared with her. He begins to realize that the pleasure of these memories is worth living through the pain of not being in a relationship anymore. But being stuck in the dream/memory world, he cannot do anything to stop the process which is taking place in the real world in his apartment.

The memory sequences are absolute brilliance. The narrative of the story jumps across time here. From a scene which takes place in the past, to a scene in the future where the movie started, to what is happening in the present where the Lacuna crew is deleting the memories. The visual imagery as to how the memory gets deleted, and what Joel tries unsuccessfully to prevent it captures the viewer with awe.

The movie however is not just about these two. There is a crew of three working on the deletion, of which Mary (Kirsten Dunst) and Stan (Mark Ruffalo) are in a relationship. The third character Patrick (Elijah Wood), is using the personal files and objects of Clementine that had been given to create the deletion as means to gain knowledge to impress Clementine and date her. This small but very wonderfully told sub-plot is as interesting as the main story line.
We already know that Joel will be unsuccessful in preventing the deletion on account of him not recognizing Clementine in the future when they meet in Montauk. While they start afresh , oblivious to what has already happened between them they receive records of their memories from an employee at Lacuna who believes that the company has done something very wrong, and has sent all the customers their records. You will have to watch the movie to find out how the two of them deal with this disclosure.

The title of the movie is inspired from the poem Eloisa to Abelard by Alexander Pope. The poem is about the tragedy of a love affair that couldn’t be, and the heroine’s believes that she can only be at peace if she can forget about this love that could not be.

How happy is the blameless vestal’s lot!
The world forgetting, by the world forgot.
Eternal sunshine of the spotless mind!
Each pray’r accepted, and each wish resign’d;

This is one of my favorite movies that seamlessly combines romance, science fiction and philosophy. I will leave you with the trailer of the movie.

Written for day 5 of the A to Z Challenge 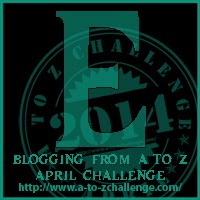 23 thoughts on “Eternal Sunshine of the Spotless Mind”