A home is an important factor in our lives. In spite of the obvious fact that it provides us shelter, it is something that is our own. A place where we can be we, have our own environment of desire, and sense of being. This is why home is where we can be the most comfortable. An important aspect of the home are the walls of the place. While structurally important, they are also add a feel, a vibe so as to say based on what color we apply on them, and what we hang on them. It is not that I do not have a home, but it is in essence mom’s home. In itself, I see no harm or wrong in living with your parents. It is all based on the personal equation you share with them.
The idea that I have, is that it is the home she bought. She literally saved money penny by penny, and over a period of time so much of her has come into how the home is. There are of course some touches that are mine, a reflection of who I am and this is on account of the years that I have spent living there. Now I will talk of what my house would be, and how I would like it.

I have a fascination for posters. The posters that you put up on your walls are important, because you’re adding something tangible and very visual of what you like. I am a big fan of comics and cartoons. One of the earliest cartoons that I fell in love with was Batman animated series. In itself, it is a wonderful series. It makes good use of the audio visual medium through their art, and voices of Kevin Conroy as Batman and Mark Hamill as the Joker. I have wanted a Batman poster ever since, and finally bought one that shows him in all his glory: with his rouges gallery.

While Batman is a definite favorite when it comes to DC Comics, I don’t have a clear favorite from Marvel. I have loved Spider Man, Wolverine, Silver Surfer, Hulk, Iron Man, Nate Grey equally (or sometimes more) from time to time. This is why I settled for this poster, which has different panels from Marvel Comics, and covers most of the characters. 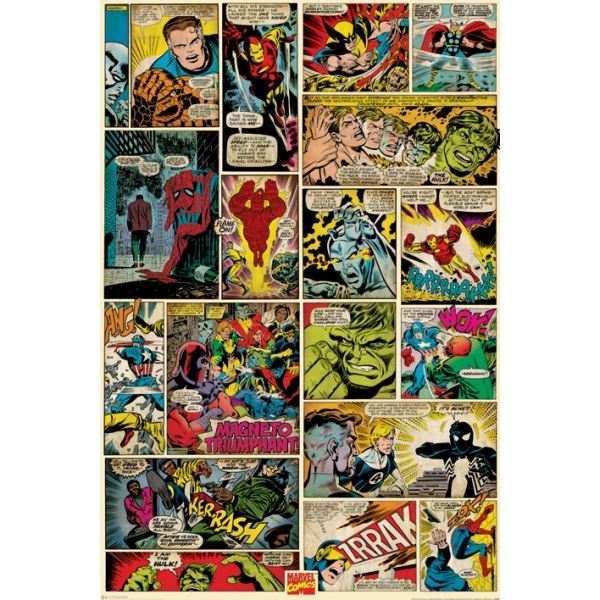 Pink Floyd is one of my favorite bands. I don’t listen to it as much as most fans though, frequently have to look up their names, and can recognize only a handful of their tracks by name. However they’re responsible for some of my favorite music, and along with AC DC, formed the gateway into English rock music for me. This poster is the famous the Back Catalogue poster that I first saw at my tattoo artist’s place. It has women sitting on the edge of a pool, with album art painted on their back. I did have this framed and put up at my previous rented place, but it got stolen during shifting.

Calvin and Hobbes has always been a delightful read for me. Apart from the obvious fun and laughs, it transports me to simpler times, and how Hobbes is a safety anchor for Calvin who wants to do all that he wants. They are in true sense, soul mates.

Recently, I have fallen in love with the Song of Ice and Fire by George R R Martin, which has also been made into the Game of Thrones TV Series. ‘Winter is coming’ is a popular line from the series, but this poster reads that ‘War is coming’. It has such a brilliant depiction of it, a bloodied hand holding a throne high with victory. It shows the power and loss of lives associated with thrones.

I do have all these posters with me, after the incident with the Floyd poster (which I bought again), I have decided to keep them rolled up in the packaging they came in. As of now I plan to frame them and let them see light once I move to a permanent place.

Written as a guest post for Project 365. The prompt was “What do you display on the walls of your home — photos, posters, artwork, nothing? How do you choose what to display? What mood are you trying to create?”

7 thoughts on “On my walls”

Little pulses of activity in the CPU of a thoughtprocessor. Batteries not included.